Home » 5 Ways to Use Framing in Your Content Marketing 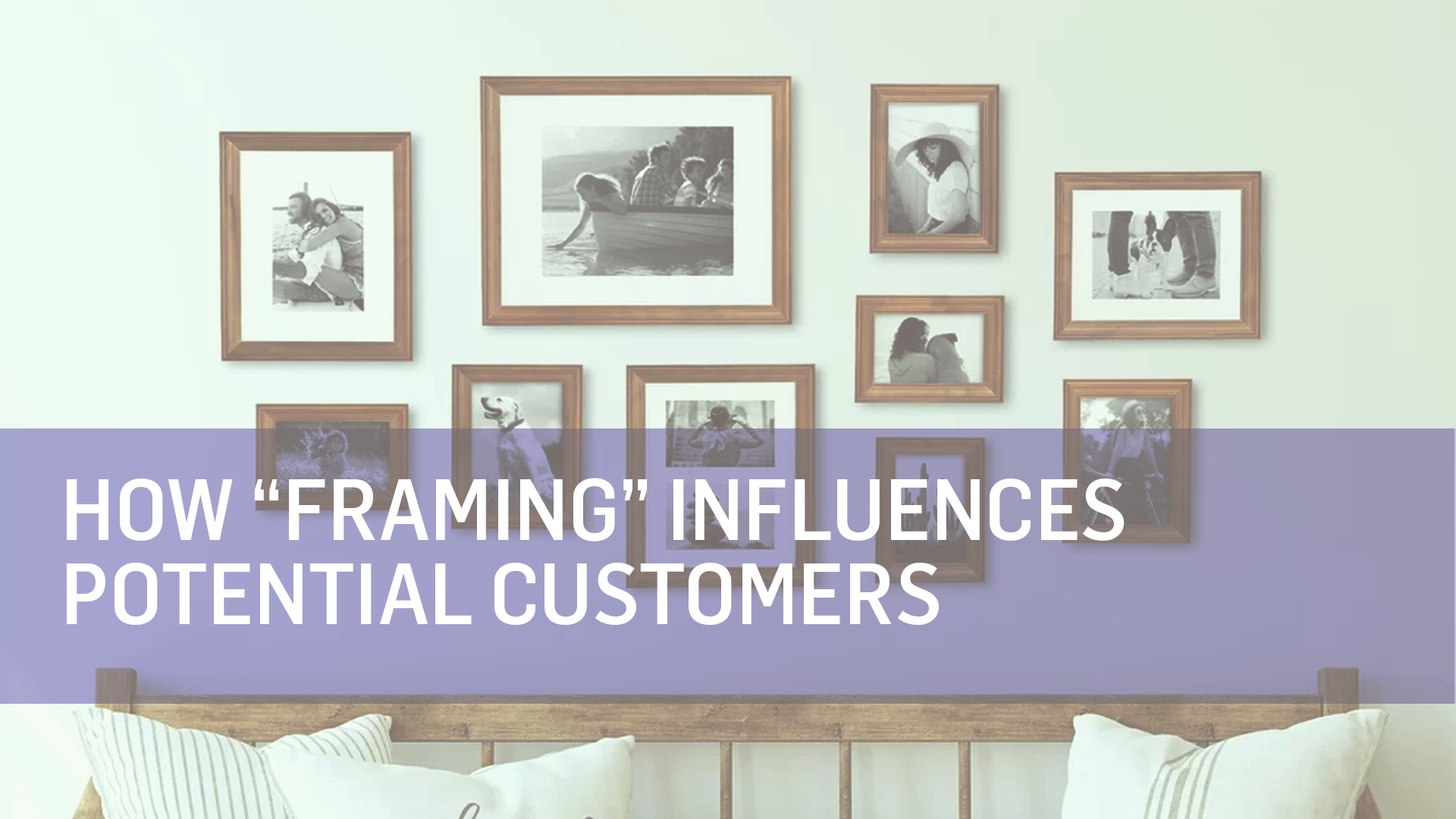 How to use framing in advertising and marketing

Is the glass half full, or half empty?

Loss framing takes advantage of predictable responses that occur when people fear loss. When faced with the choice between a definite small loss, or an uncertain, but riskier chance to avoid loss, people will tend to choose the riskier option. For instance, if a person is given $100, and had to choose whether they would rather lose $50, or flip a coin where the consequences were losing or keeping the entire $100, most people would select the coin flip.

Loss framing seems like a poor decision when you think about it logically. Why would you risk a significant loss, when you have the option to choose a much smaller guaranteed loss instead? This paradoxical response is due to something called “risk aversion,” and surprisingly, it’s used even more often than gain framing, despite its negative connotations. You can see examples of loss framing in nearly any store or marketing campaign, with phrases like “Limited-Time Offer!” and “Last Chance – Don’t Miss Out!” creating a sense of urgency.

Loss framing is incredibly popular because most people fear a loss more than they desire a gain. However, when companies use loss framing excessively, it loses its impact. If you have a “Last Chance” sale every week, customers will no longer feel motivated to act immediately. Be sure to use loss framing strategically, in conjunction with other marketing and advertising techniques.

Gain framing highlights what the consumer stands to attain by taking action. Gain framing allows you to emphasize the positive aspects of your products, company, or services. You may see gain framing used in conjunction with loss framing, or on its own. This is because even though gain framing often doesn’t lead to as much immediate action as loss framing, it does build your brand’s reputation, increasing the perceived value and trustworthiness of your company. Gain framing is able to be utilized more often than loss framing, since it doesn’t rely so heavily on a sense of urgency.

Where loss framing encourages risk-seeking behavior, gain framing must do exactly the opposite. When faced with a definite small gain, or a chance at a larger gain, people tend to choose the safest option. This means that when utilizing gain framing techniques, you should emphasize feelings of confidence and assurance. Gain framing is perfect for situations where the outcome is certain, whereas loss framing is better for uncertain situations. Gain framing is also used to create positive intentions, and is often showcased in healthcare industries, and in environmental campaigns, where negative framing may not be as effective.

3. Hyperbolic Discounting: Timing is Everything

Hyperbolic discounting is often seen in the form of points systems. Despite having a defined value, many restaurants, service businesses, and credit card companies use points, because  people get an immediate reward, and it typically seems like “more” than its actual value (for instance, 100 points may equal 5 dollars).

Hyperbolic discounting is also used to get customers to commit, even when they are hesitant to take action. Techniques such as offering free shipping, “try before you buy” strategies, and tiered pricing make your products and services more accessible, even if it increases the overall cost later on.

4. Statistical Framing: Add an Authoritative Tone to Your Campaign

Statistics and ratios are used often in advertising and marketing, because it makes your message seem more trustworthy. This is true when statistics are used in positive framing (“our product is 80% effective!”) as well as negative framing (“Their product fails 1 out of 5 times!”). Statistics, numbers and graphs make any information displayed more convincing, particularly if you include an accompanying image.

If you want to make your campaign more credible, use statistical framing. In fact, statistical framing is so effective at establishing credibility, it is often used in misleading or outright deceiving ways. You should never have to use statistics or graphs that aren’t forthright; if the numbers aren’t flattering, don’t risk damaging your company’s reputation and losing consumer trust by creating a dishonest campaign or displaying statistics in a deceptive manner.

5. Emotional Framing: The Importance of Phrasing

Emotional framing puts emphasis on your choice of words. Is a high-end bag “expensive,” or “luxurious”? Is a low-end vehicle “cheap,” or “economical”? By understanding how each word will impact the consumer’s overall opinion, you are able to create a more effective campaign. You can also use emotional framing when choosing the context in which you are displaying your product or service. Emotional framing can also be implemented with images and videos, creating a powerful story that can drive people to take action.

No matter what your goal is for your marketing or advertising campaign, you will use framing in the way you communicate your message. By understanding different framing concepts and techniques, you will be able to elicit the reaction you want from your target audience. When you master framing, your campaigns will become more effective and memorable. Try framing your campaign in several different ways over time, and evaluate your results to see if you are evoking the correct emotions.